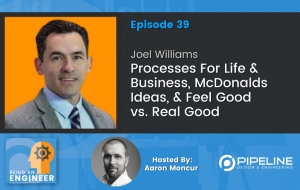 Joel Williams and I met in college where we were roommates and both earned a degree in mechanical engineering. He then went on to earn a master’s degree in Materials Science from MIT, followed by an MBA from Harvard Business School. Moreover, he has worked in many industries including semiconductors, automotive, industrial chemicals, medical devices. Currently, he serves as President at a company called ILC Dover.

Beyond being ridiculously smart, he is also one of the calmest and most humble people that I know. I have been so impressed with the way he lives his life, both from a professional and a personal standpoint. I was deeply grateful that he agreed to spend an hour with me on the podcast sharing his wisdom. This episode is probably the least about engineering of all the episodes we’ve done to date. Yet, it may be one of the most impactful to you as a listener both professionally and personally.

This show is brought to you by Pipeline Design & Engineering. Pipeline partners with medical & other device engineering teams who need turnkey equipment such as cycle test machines, custom test fixtures, automation equipment, assembly jigs, inspection stations and more. You can find us on the web at www.teampipeline.us. 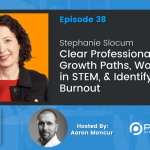 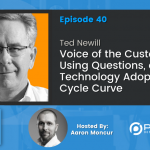